A momentus day in alumni history... the wedding of two former Walhampton pupils! Laura (Wade) and Robert Jardine at their wedding reception

Beautiful bride Laura has kindly filled us in on how she and Rob found each other again and ultimately tied the knot:

At that time, all pupils were boarders and there were about 180 pupils in total, so by default everyone knew everyone as we spent so much time in such close proximity. We only had exeat weekends a couple of times a term, so it wasn’t unusual to live at the school for weeks, sometimes months, at a time without going home. So weekends were a time of sport, play, exploring the woods, building camps and generally having a lot of fun with our friends.

Back in about 2006, Ralph Montagu, Chris Knox and I started the monumental task of trying to track down old Walhampton pupils from the 1970s, together with considerable help from Carol Lawford and Gerald Carey, both now sadly passed away. The school didn’t have any pupil records from that era unfortunately, so a lot of work and research had to be done. As a result, over the next few years we had a number of reunions both at the school and in London, as many OWs work in London now.

It was at a reunion in December 2011, that Rob came along to, that we met again. I’d had no contact with him at all up until that point, but had been in contact with his older brother Lewis, who joined the school in September 1971. Lewis was able to get in touch with Rob to let him know about this particular reunion, and as he was at that point going through a divorce from his first wife, was able to come along.  In a nutshell, we got on really well that evening (1 December 2011), and he moved in with me on 30th January 2012!

So we’ve been together since then and now live in Surrey. We got married on 6th October this year, just a small ceremony in our local registry office, and then had the reception and celebration dinner last Saturday (18th November) where we had a large number of family and friends, including those in the photo below, who were also at Walhampton when we were, and are now firm friends again, following the reunions. Both Chris and Ralph were there celebrating with us too, which was lovely.

We head off to Barbados on honeymoon on 30th November. Can’t wait! 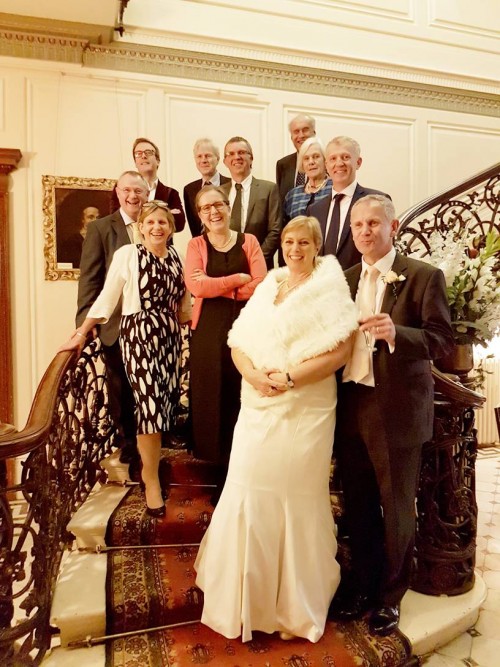 This year we are celebrating the career of David Hill as he marks 50 years of service to Walhampton school. More...