Two of our original boarders from the late 1940s came to visit Walhampton and reminisce about their time here under Headmistress Audrey Brewer. Jamie Heron and Michael Perkins
In May we were delighted to welcome two of Walhampton's original boarders, Jamie Heron and Michael Perkins. Our resident school historian and estates manager, David Hill, escorted us on a tour around the school to show the two old boys how things have moved on since their time here and explained some of the history of Walhampton before it became a school.

"I can't get over how neat and tidy everything is!" commented Michael Perkins. When 'Dordie' (Audrey Brewer) created the school in 1948 the house and gardens hadn't been well maintained as it had been used as an American airforce convalescence home during the war, and budgets remained tight until John Bradfield became headmaster in 1954.

Jamie Heron has been back on a more regluar basis over the years as his sons were pupils at Walhampton and his grandson is currently in Pre-Prep, making the Heron's one of few three-generation families in the school's history.

The 'twins', as they refer to themselves as they were born on the same day, were both welcomed by headmaster Titus Mills and his wife Jemima for afternoon tea, where they regaled us with stories from their time at school... most of which is unprintable!

If you are one of Walhampton's original pupils, from the late 1940s or early 1950s and would like to get together for a reunion, then please do get in touch with Samantha Allen on 01590 613 300 or s.allen@walhampton.com 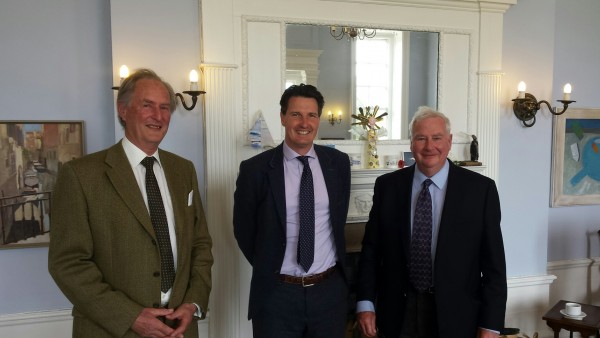 OW 1958-1962, Jeff Ridgway, enjoyed a tour around the school and was delighted to see the mural so well preserved! More...