Dennis Dunlop inspired the Walhampton boys to fundraise for several WWF campaigns over his time at the school. Guy Fancourt and Ralph Montagu recall the flamingo campaign... Shield presented to the school for their fundraising efforts

Guy Fancourt was watching David Attenborough’s TV program recently which sparked a memory from his school days... During his time at Walhampton,1970-75, he remembered that the school lead a fundraising campaign to support some work at Lake Natron to help the flamingos. The boys got stuck into fundraising mainly during their school holidays.

The WWF (then the World Wildlife Fund) had an annual fundraising campaign directed at a particular project. Schools were encouraged to participate and the Head of Science, Dennis Dunlop, was very keen that Walhampton should do its bit. In 1972/3, the appeal was for flamingos on Lake Nakuru in Kenya. There is a bit about it on the WWF timeline: 'WWF purchases 37,000 acres adjacent to Kenya's Lake Nakuru. Nearly 30 bird species depend on the lake, including a million flamingoes for which the lake is the principle feeding ground in 1973.'  https://www.worldwildlife.org/about/history

Walhampton raised over £100 and, to recognise this, the school received a plaque from the WWF which used to hang in the library (see photo below). The following year, the campaign was to save the tiger, but I am not sure we raised so much money as I don’t recall a plaque. After Dennis Dunlop left at the end of 1973 encouragement on WWF issues faded.

Below is an excerpt from the Walhampton school magazine about the presentation of the shield. 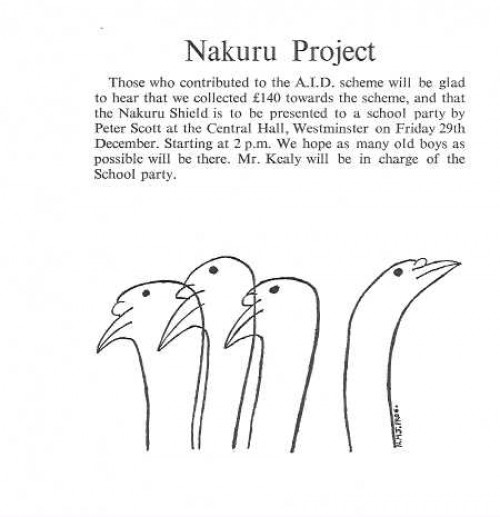 If you're interested to know what has happened to the flamingos on Lake Nakuru... take a look at this You Tube feature from last year:

It looks like the fundraising efforts were worth it - well done our 1970s fundraisers! Take a look at this lovely article about the Walhampton Pony Treks More...