International advisor to countries at war, Nigel Roberts gave a fascinating talk to pupils, parents and staff about his work and how Walhampton set him on this track. Nigel Roberts (OW 1959-1964) and Robin Rustom (OW 1957-1963)
Nigel Roberts was a pupil at Walhampton between 1959 and 1964. On meeting him at an Alumni Reunion in London last year, Nigel (who lives in the USA) agreed to talk to us in Chapel whilst he was over for our 70th anniversary celebrations. His wife, Sarah, and long time school friend, Robin Rustom, joined him for a tour of the school and tea with Mr Mills and Mr Stanley before his chapel talk.

Read below his inspiring words... 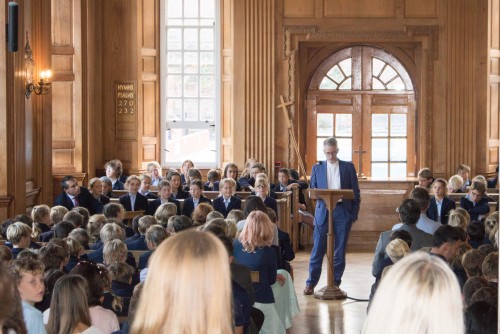 It's over 50 years since I was last in this room - more than half a lifetime.  It doesn’t seem that long, though, because my memories of the time I spent at Walhampton are still so vivid.

When I first came here, in September 1959, I was 8 years old.  I wasn't your most willing pupil.  My parents lived in Africa, a world of heat and light where I'd been left to run around outside for much of the time.  England, in contrast, was cloudy, cold and dark.  You had to wear shoes.  People seemed to be eating the whole time - at least that's how they sounded when they spoke English.  I was very homesick.  I tried to run away - twice in one day actually.  I'd no idea where Africa was, but I thought there must be a ship in Lymington that could take me there.  I was sure they could use a cabin boy or something.

Bit by bit, though, I settled down.  To my surprise, the teachers were kind and patient - as always, the headmaster sets the tone in a school, and I had the great good fortune to be here when John Bradfield was headmaster.  JB was one of the world's great eccentrics.  His family was wealthy - wealthy enough for him to buy Walhampton - but he dressed like a tramp and appeared to have no possessions at all except the pencil stubs and rubber bands he filled his pockets with.  Wealthy he may have been, but he was unimpressed by riches, and by success of that kind - his mind was totally elsewhere.  His idea, I think, was to create a school that felt like a holiday camp.  A place where everyone could find something they liked doing, and in so doing, find themselves.  And that's how, in time, it worked for me.  I was the type of boy who couldn't keep his mouth shut; but in addition to the inevitable detentions, there were school plays, there was a debating society, and the choir, and the annual reading competition.

Let me take you back to that era.  England in the late 1950s was a place that had only recently escaped disaster - I'm talking about World War II, Hitler and the very real possibility of invasion by the Nazis.  Many of our parents and our teachers had fought in the war, and most of them understood how lucky we'd been to escape.  And although that war was over, we now had the threat of nuclear war to worry about.

You may have heard of the Cuban Missile Crisis.  For several days in October 1962, America and the Soviet Union came very close to firing nuclear missiles at one another - and at us.   Anyone who was at Walhampton then remembers that time.  A Cub Scout meeting comes to my mind.  They were always on Wednesdays, which would make it October 24th.  That was the critical day in the confrontation, with Soviet ships approaching the US maritime quarantine line which, had they crossed it, would have started a war.  The teacher who was our Cub Leader - our Akela - called us all into a circle.  He explained what was happening, and said a prayer in which he asked God to protect us all and to lend the leaders of both sides wisdom and sound judgment.  It was a mild October evening; we were standing outside near the school's Orangery, under a huge old tulip tree and a starry sky.  It was unforgettable.  That teacher, Mr. Davies - more about him in a moment - kept nothing from us.  We were 9, 10 - I was 11 - but he respected us enough to tell us the truth.  That, more than our fear and the danger of the moment, is what I now remember.  He didn't see us as a bunch of kids, but as individuals - as souls.  And that was typical of this school.

If we're lucky in our schooling, we come across at least one teacher who grabs our attention, and makes us hungry to learn.  When I arrived at Walhampton I was, on top of being homesick, lazy and disobedient.  "I am convinced he is much too half-hearted about what he does and does not work nearly as hard as he could if he really set his mind on it" reads a typical school report of mine.  Or "He adopts a defeatist attitude to anything new or remotely difficult".  But Mr. Justin Davies, my Latin teacher, gradually convinced me there was a reason for spending all those daylight hours sitting inside, at a school desk.  He taught Roman history, and he was a magician.  With him, the distant past came alive.  We could actually imagine ourselves woken up by screaming geese on the Capitoline Hill, and rushing out in time to stop the barbarians from overrunning Rome.  Or we could feel how terrifying it was for Varus' Roman legionnaires to march out into the dark, gloomy German forests, where they were swallowed up forever.

What he was teaching us, though, had a great deal to do with the Second World War, and the Cold War.  He admired the ideal of Rome, and the dream of America - above all, their respect for the law; the ideal of laws that apply to all citizens, regardless of their color, ethnicity or gender.  But he also knew that you can't take civilization for granted; that it needs active defence.  What did that mean? Paying attention to history, for sure - but more importantly, being a decent person.  Being tolerant, and open-minded.  And also being prepared to fight for what you value when you have to - as he, his friends and our parents had done.  As those veterans from Arnhem who come here every year did.

After I left school, I traveled a lot and I worked for many years for the World Bank; the World Bank is part of the United Nations, and isn't really a bank as such - it provides money and advice to the governments of poorer countries, and helps them build dams, run schools, operate transport systems and manage their economies.  Many of the places I visited or lived in as part of my job suffer from continuous war - places like Afghanistan, Somalia or Palestine.  In time I became convinced that war and violence were the worst problems they faced - year after year of civil war breaks down respect for the law, and destroys societies.  In a sense, the world is divided into two types of societies - those which are more or less peaceful, and those that are not.  Almost all of the world's poorest countries fall into the second category.  Did you know that back in the 1950s, people in Somalia and in New Zealand had roughly the same amount of money to spend, and enjoyed a similar standard of living?  Since then, New Zealand has lived in peace and Somalia has been torn apart by war.  New Zealanders live lives like yours and mine.  Somalis are lucky if they have a house to sleep in, and if they can eat more than once each day.  Somali kids, if they are among the few that have a school to go to, must check their guns in at the school gate on the way to class.  War is the single most important difference between living a life with possibilities, and a life of poverty and fear.

So war and peace became my obsession, if you like, and part of this has involved helping countries try to negotiate peace treaties - in the Philippines, for example, or between Israel and the Palestinians, or in Myanmar.  I wish I could tell you how succesful I've been, but that would be a lie - none of these places are at peace yet.  But this isn't the point: no single person matters very much in the bumpy, difficult road from war to peace.  It's often a very long process, and it only happens once enough ordinary, decent citizens in those countries themselves find their voices, and wear down the greedy, violent people who've made their lives so miserable.

What am I getting at, though - what's the connection with Walhampton?

Like most kids, I didn't have a clear idea of what I would end up doing when I left school - or, more accurately, I didn't end up doing what I thought I was going to (which, in my case, was flying for BOAC, the predecessor to British Airways).  I seemed to drift into my profession, and only then get hooked by it.

When I look back now, though, there is a pattern, and it began here.  In Justin Davies' Roman history lessons, where we learned how law holds back chaos, how corruption destroys states, and how rich and powerful societies come to pieces if ordinary people don't stand up for what they believe in.

One day in the far future, one of you will be asked to come and speak in chapel for a few minutes, just as I have been.  I hope you will be able to say how important your time here has been to you.  That you will also recall your own John Bradfield, your own Justin Davies - teachers who inspired you by belief and by example.  Like me, you may not always have been happy here, and you may not have been the perfect student.  But you will, I hope, know how deeply this place has marked you, and will, like me, be forever grateful for that. Saturday 15th September was a joyous occasion where Walhampton families, past and present, joined together to celebrate 70 years of our fabulous school. More... Two of our original boarders from the late 1940s came to visit Walhampton and reminisce about their time here under Head… More...