Judy Zipursky delves into her past and finds Walhampton!

From her home in Canada, Judy found that her ancestors used to live and work at Walhampton. She came over to visit and tell us more... Judy Zipursky visiting her ancestors home
From across the Atlantic came a message from a lady looking for more details about Walhampton where her great grandfather had worked and grandfather had been born. She’d found some photos of Walhampton on the internet and whilst identifying which ones were the school I asked her about the connection. Judy Zipursky has delved into her family’s English past and revealed some interesting details about the workers at Walhampton in the late 19th century.

My great grandfather was Thomas Osborne Adams born 1st January 1846 in Aynho, Northamptonshire. He was born out of wedlock so took his mother’s maiden name Adams. His mother went on to marry a William Robbins so my great grandfather is listed in future Census as Thomas Robbins - such is the case when working and living at Walhampton.

In the 1871 Census Thomas and his wife Elizabeth are recorded as living at The Lodge, in Aynho. Thomas is reported to be a Gardener by profession.

By the 1881 Census (taken April 3rd) he is living at Walhampton House, Stable Yard, with his wife and three children (born 1873, 1876 and 1877 back in Aynho). My grandfather Charles Frederick Adams was born one month later, 29th May 1881, at Walhampton. He was, however, baptized back in Aynho on July 31st 1881. Not sure if they just returned for the baptism or they had by then left Walhampton but his father is again recorded as being a Gardener.

By the Census of 1891 it appears that they had moved north as Thomas Osborne Adams is recorded as a Publican in Charlton, Northamptonshire.

So my great grandfather, Thomas, lived at Walhampton House sometime between 1877 and the Summer of 1881.

Charles, my grandfather, went on to live the rest of his life in Charlton (aged 82 when he died in 1928). He owned a small farm and became a publican. Charlton was the home during those years for F.E Smith, the 1st Earl of Birkenhead who was one of Churchill's closest friends.

They had 17 household staff: They all appeared to be single and living in the house. My great grandfather appears to be the only one with a family of 3 children at the time.


Although Judy has lived in Vancouver, Canada, for the last 46 years, she went to college in Exeter and was over for her graduating class's 50th reunion. Whilst in southern England she was able to visit Walhampton and see where her ancestors would have lived and the beautiful (and extensive!) garden and grounds they would have looked after.

Thank you for sharing your story with us Judy. 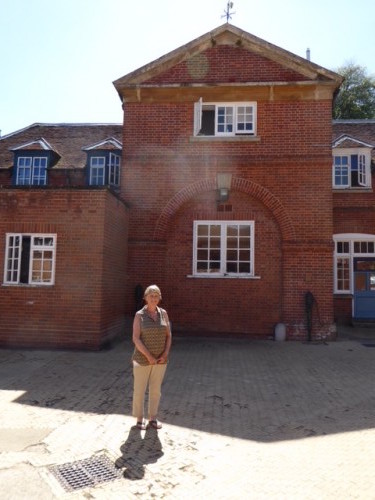 Edward's rugby career is really taking off - playing for the Bath academy Under 16s and a rugby scholarship to Millfiel… More... Little was known about the role of Walhampton during World War II until a recent discovery by OW Peter Ellis More... As one of our oldest 'old boys', at 86 years old, we were delighted to welcome Tim Deakin to school to share his memorie… More...