Lew Funk, Photographer to the US Air Force

Thanks to an online search by OW Peter Ellis, more details about the US Airmen who stayed at Walhampton during the second World War have been revealed to us via a family member of one of the residents...

John Funk, son of M/Sgt. Lewis D. Funk, has collated his father's WWII photographs, within which are a charming collection of the time he and his friend, T/Sgt. Shephard G. Litsey, spent at Walhampton for rest and relaxation part way through their missions.

From an analysis of his father's mission logs, John Funk suspects that he visited Walhampton in August of 1944 during the time when the 34th Bomb Group changed over from flying B-24's to B-17s.  During the changeover he was grounded for 46 days.  Before that the longest time between missions was 15 days at the very beginning of his duty.

Sadly, shortly after their stay at Walhampton, on November 29th 1944, Sgt Litsey's aircraft was blown out of the sky by a direct flak hit which no one survived. George E. Kistner. (388th Bomb Group, Knettishal) was another resident at Walhampton during this period. In the article below the Ludwigshaven mission referenced by George referred to the fatal mission that claimed the life of Sgt Shephard Litsey. 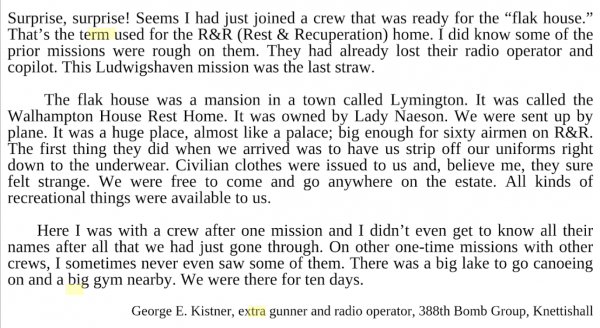 For more details about the involvement of the 34th Bomb Group in the war, as collated by John Funk, please visit  http://www.johnfunk.com/WWII/index.html and to view his collection of WWII photos go to WWII Photos by Lew Funk. Click here to see the Lew Funk photos of Walhampton.

Our sincere thanks to John Funk for providing such interesting details about his father and friends and for giving Walhampton permission to use his father's fascinating photographs.


Click on a photo below to see it larger and arrow left/right to browse the collection. Saturday 15th September was a joyous occasion where Walhampton families, past and present, joined together to celebrate … More...