Caroline Arnott, who worked as a Matron at Walhampton from 1970 to1994, sadly passed away on Monday 1st February 2021.

Her niece, Vicki Miller, kindly informed us of her passing and shared the photos below. She said "I know she was very very happy at the school and loved looking after the boys. She took great pride in her work there and always spoke about the school with great affection whenever we asked her about Walhampton. She had a lovely photo of the school in the snow on her writing desk and had that at Solent Mead when she needed to move into care. After retiring from Walhampton, she lived for the rest of her life in Lymington. She was a devout Christian and would regularly help with her local church. She always made time for others, was a great listener and extremely kind. She never married but has me as niece and two nephews and lots of cousins and spent holidays visiting all of us, particularly those in the West Country."

"I remember Caroline as a very kind, capable and conscientious person with a quietly expressed sense of humour which revealed with little doubt that she had the measure of all her colleagues.” David Hill, who has been a member of staff at the school for over 50 years.

"Caroline Arnott was the matron for the Lodge boarders in the 70s and well beyond. In my time, the Lodge accommodated 30 boarders, 26 of whom were in their first year. The other 4 were Lodge helpers, boys aged 11 being given some early responsibility. Robin and Gill Murray-Walker were the house parents. Caroline was very good at her job, getting on very well with the boys and staff. Not that she stood any nonsense, of course. Affectionately, if a little unkindly, her nickname was Aunty Alligator! She took it all in very good part. She was at Walhampton for a good number of years. It is very sad that she has died.” Chris Knox, who was a teacher at Walhampton in the 1970s. 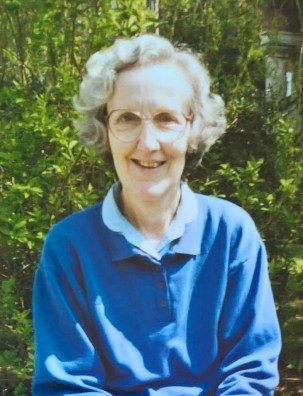 The following photo was taken in the Lodge Garden on 29 April 1994 when the staff gathered in Long Break ( just before Lunch ) to celebrate Caroline Arnott's 60th birthday. She retired at the end of the Summer term that year. 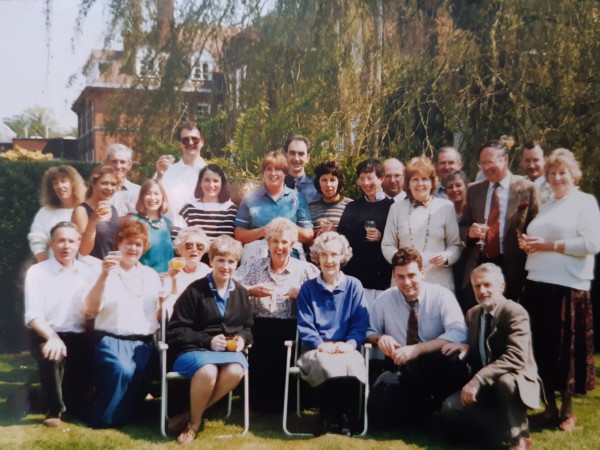 Thank you to Chris Knox, Jane Pickance and Michael Walsh for delving into your memories for people's names and faces!

The below photo has also been sent in by Rosa Crawford, from the late 1980s/early1990s, Miss Arnott on the front row again: 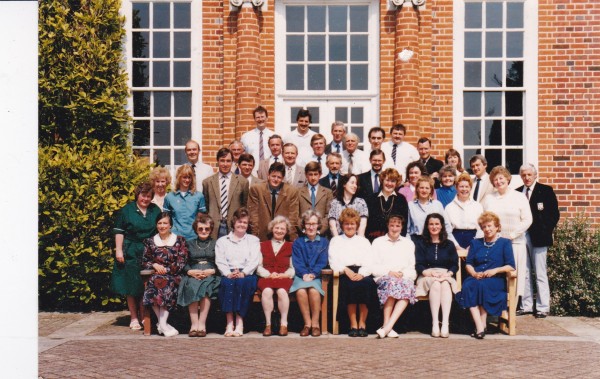