At our recent alumni reunion in London, Saleem Shamesh spotted himself in a school trip photo - read his account of that expedition through France. Striking the same pose - Saleem now and then!
In Saleem's words...

The picture was taken on the French trip that took place in Expedition Week for the leavers year, so dates back to the Summer term of 1974. The trip was led by Major Kealy, who probably took the picture as he is not in it. I can identify everyone in the picture from left to right:
Neil Stevenson, Arthur Milner, Simon Clements, William Cussans, Gavin Smeed, Nicholas Parkhouse, Andrew Johnstone-Burt, Saleem Shamash, Jeremy Fisher, Grant Cordner, Mr Murray-Walker, Patrick Coghill, Richard Vessey. 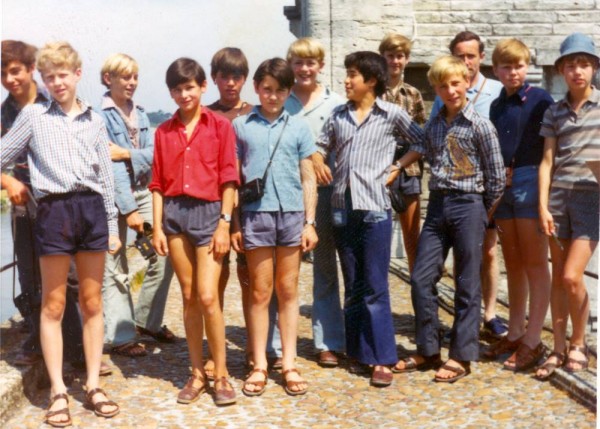 Even after 44 years, I remember the trip with great memories...

We left in one of the school minibuses and took a ferry across to France, then drove to Paris where we met up with Tom, Major Kealy’s son. We had dinner in a little Bistro (I can even remember having andouillette) and then stayed the night before a long drive down to the south.
I cannot recall the exact itinerary, but the whole trip was blessed with the most fabulous weather.

We spent time in Avignon, dealing with issues such as whether the song is “sous" or “sur" le Pont and visiting the Picasso museum. We went to Nimes and Arles and saw the splendid bull fighting arenas, although we did not see any fights, even though the variant in France entails lifting penants off the bulls horns, in a sort of dangerous game of tag, rather than any spearing and killing.

I recall visiting the amazing Port du Gard, an enormous Roman aqueduct and incredibly in a pre “elf n safety” world we climbed onto the top, with not a safety railing or anything to prevent us falling into the river and rocks below!

At some point we visited La Camargue and happened upon a huge Gypsy festival where they were spit roasting whole cows on open fires. Major Kealy wonderfully seized the moment and bought us all a plate of delicious fare instead of whatever our plans for dinner might have been. Roadside facilities in those days were somewhat basic - I can recall us eating water melons sold by the roadside to cool down and we all recoiled in horror at being confronted with a squat loo.

Booty proudly taken back to School would have included fire crackers and flick knives and Andrew Johnstone-Burt managed to acquire a false pair of boobs that he wore and flashed all along the trip back up through France without getting arrested. Happy days!